February 9, 2021. 7.42pm. All eyes and ears in the UAE will be glued on Mars. Around 9.9 million people in the country will hold their collective breath and say a prayer. For, the next 27 minutes will decide the fate of the Emirates Mars Mission.

Hope Probe arrives in Mars on Tuesday for the most crucial part of the mission — the Mars Orbital Insertion. It simply means the probe will slip into Mar’s gravity so that it can orbit the Red Planet. That would make the UAE the fifth country to reach the Martian orbit, after successful missions by the US, Russia, China, the EU, and India.

The success of the Arab world’s first interplanetary mission will be a momentous occasion for the UAE and its fledgling space programme. The Hope Probe, built by Emirati engineers, was launched from Tanegashima, Japan, on July 20, 2020.

The probe reaches Mars in the year the UAE celebrates its 50th anniversary. The space mission’s challenge and ambition show that no frontier is too far for a young nation like the UAE. The Mars mission is indeed the beginning of more exciting times. 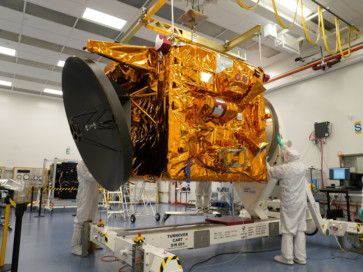 How Hope Probe will enter the Mars orbit

The Mars Orbit Insertion (MOI) is the most critical and challenging part of the mission, where precision is the key. If Hope Probe goes too fast or too slow, it will either crash on Mars or widely miss its orbit and get lost in deep space.

Suhail Butti Al Dhafri, Deputy Project Manager, said Hope Probe would deploy its six Delta V thrusters (In general physics, Delta V is the change in velocity) to rapidly reduce the speed of the spacecraft from 121,000 km/h to 18,000 km/h before entering Mars’ orbit. The MOI manoeuvre involves a 27-minute deceleration. “If one pair malfunctions, two pairs will fire up and increase burning fuel to achieve the required deceleration,” he added.

Hope Probe will do an autonomous orbit insertion. The spacecraft will operate on auto mode, using star trackers to help its position.

All commands to Hope Probe have been pre-programmed. There is no live command that ground crew at the command centre in The Mohammed Bin Rashid Space Centre (MBRSC) can send to the probe as there is a 22-minute delay in communicating with the spacecraft. It requires 11 minutes to send and another 11 minutes to receive radio signals, hence the need for autonomous manoeuvres.

The Emirates Mars Mission team will use the DSN (Deep Space Network), Nasa’s international array of giant radio antennas that supports interplanetary spacecraft missions, plus a few others that orbit Earth for communications. Hope Probe will also be monitored through three antennas spread across Canberra, Australia; Madrid, Spain; and Goldstone, California, USA.

Since the vast distance between Mars and Earth causes communication delays, MOI will commence at 7.30pm (UAE time) on February 9, but the signal confirming the start of the manoeuvre will reach Earth only 11 minutes later, at 7:42pm. During the MOI operation, Hope’s signals will be routed through the Madrid antenna.

The MOI burn (firing of thrusters) will commence when the spacecraft is 2,363 km from the planetary surface. Hope will reach 1,062 km from Mars (the periapsis or nearest point of its planned capture orbit) before the burn ends at 1,441 km distance from the planet.

Some five minutes following the MOI burn, the Hope probe flies into the dark side of Mars. This period is called ‘occultation’ — this occurs when an object or spacecraft is hidden by another object (or planet). Radio signals will be lost for some 15 minutes until the probe can be contacted again.

Hope’s capture orbit takes the spacecraft from a distance of 1,000km (periapsis, or nearest point) to 49,380km (apoapsis, or farthest point) from Mars’ planetary surface. During this phase, Hope’s instruments will be tested for two months before it transitions to its science orbit. Three Transition to Science (TTS) manoeuvres are planned to move the probe from its capture orbit to the science orbit. The accuracy/success of MOI will decide the number of manoeuvres. The transition to science orbit will be completed by April 2021.

The elliptical science orbit of Hope Probe is between 20,000 – 43,000km around Mars, with an inclination of 25 degrees. In this orbit, the spacecraft can complete one orbit of the Red Planet every 55 hours and will capture a full planetary sample every nine days. Hope Probe’s success will make the UAE only the fifth country or entity to reach Mars and the third country to achieve it in the first attempt.

The young Emirati engineers, programmers and data analysts at the Mohammed Bin Rashid Space Centre are confident of a successful Mars Orbit Insertion. The anxiety and excitement were evident at the MBRSC command centre in Dubai when Gulf News visited last week, but the Emirati engineers, scientists and analysts exuded a quiet confidence.

Ali Juma Al Suwaidi, FlatSat engineer, said: “It is actually hard to measure the exact level of confidence in the MOI as our project director (Omran Sharaf) had said, around 50 per cent of Mars missions have failed — some have failed at launch while others during the cruise and at arrival. But we are confident as we have been running thousands of tests and simulations and we have been closely monitoring the spacecraft cruising in deep space for almost seven months now.”

Al Suwaidi is in-charge of the FlatSat, a large motherboard at MBRSC, where modules similar to a real satellite are installed. It was used to test the instruments, telemetry database and properties of Hope Probe. “Throughout the seven-month cruise in deep space, we have also simulated the capabilities of Hope Probe prior to its Mars approach. We need the right timing and speed to avoid crashing into Mars or be lost in space,” he said.

‘Success is within our grasp’

Omar Abdelrahman Hussain, Lead mission design and Navigation engineer, said: The simulations for Hope Probe journey were done at least a million times, and we are still iterating the same design we had five years ago. It has been a long process and a very tedious process, but the design is very robust. Although the failure rate is 50 per cent, I believe success is within our grasp.”

He said: “Several missions have failed and we took lessons from them to innovate and mitigate any failures for our mission. We have done our Monte Carlo Simulation, a highly precise computer-based quantitative risk analyses. We also have safe margins as there will be an 11-minute communication delay with Hope Probe. There is no do-over. We are very excited; we did rehearsals to get them right. We are confident, and we just need to trust our design.” 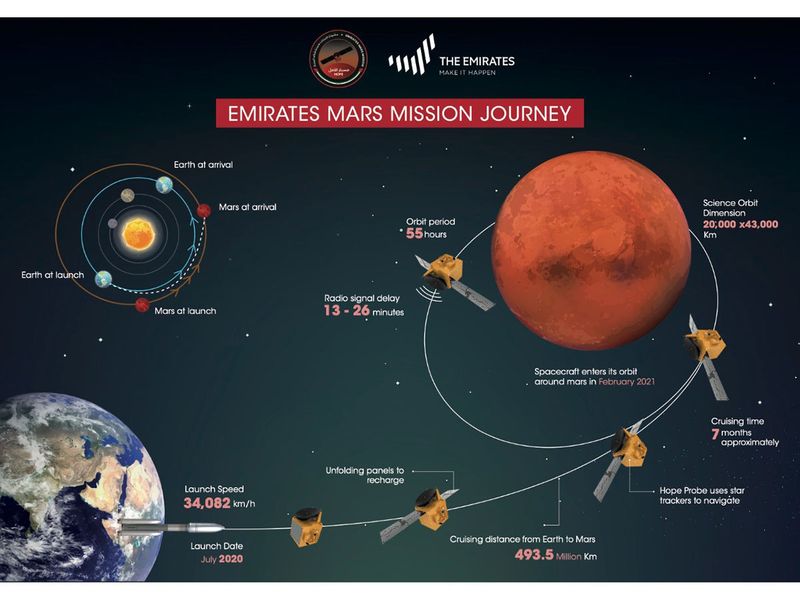